The Republic of Palau is an island chain consisting of approximately 250 islands.

An island nation made up of hundreds of islands, it’s no wonder that one of its major attractions is SCUBA diving. The islands have pristine diving on coral reefs and, in some areas, amazing World War II sunken wrecks. In addition to wrecks below water, there are places like Peleliu with powerful reminders of how the islands were used during WWII.

The country uses the United States dollar as its currency. The islands’ culture mixes Japanese, Micronesian, and Melanesian elements. The majority of citizens are of mixed Micronesian, Melanesian, and Austronesian descent, with significant groups descended from Japanese and Filipino settlers. The country’s two official languages are Palauan and English, with Japanese, Sonsorolese, and Tobian recognised as regional languages.

Palau has the reputation of being the best SCUBA diving location in the world. Franko Maps and Franko Travel agree! You can order a Franko Map of Palau by clicking on the map image. 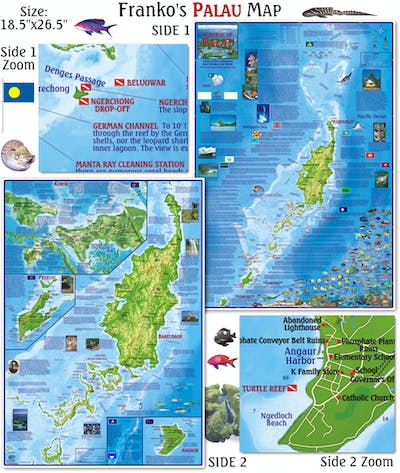