Heading to Micronesia? Learn more about it.

Micronesian Attractions Micronesia is known for diving, fishing and culture.

Truk Lagoon
The Truk Lagoon on Chuuk is the sad, but now beautiful graveyard of World War II sunken ships.

Stone Money
See the great stone money of Yap. Once you’ve seen the money you’ll want to see the wallet. These stones are so huge you’ll wonder how people moved this money.

Kepirohi Waterfall
This waterfall on Pohnpei has been described as “the best of the best.”

Sokehs Rock
This rock looks like something out of a movie of aliens visiting the Earth. It’s spectactulare and a must see when on Pohnpei.

The Blue Hole
Spectacular diving spot on Kosrae. No boat needed. It’s right offshore. It has a beautiful reef with lots of tropical fish.

Japanese Zeros
For history buffs these World War II vintage Japanese planes are a must see when visiting Yap.

Wildlife & Traveling Micronesia is a subregion of Oceania, comprising thousands of small islands in the western Pacific Ocean.

Micronesia has a shared cultural history with two other island regions, Polynesia to the east and Melanesia to the south.

Wildlife
There are many birds unique to Micronesia. There is a mammal unique to several islands known as the flying fox.

Unique reptiles include the Pohnpei Skink, the Mortlock Forest Gecko, the Ulithi Blindsnake and the Ant Atoll Blindsnake. The Giant Saw-scaled Gecko may also be endemic.

Traveling to Micronesia
No passport is required for US passport holders. Valid passport, sufficient funds and proof of onward travel are sufficient to grant entry for 30 days. Under the amended Compact of Free Association, US citizens need only valid passport for entry. United Airlines is currently the only US airline that flies to the Federated States of Micronesia.

Getting Around Micronesia Oceania is in the Southern Hemisphere and includes thousands of islands and Australasia.

Air Travel
Micronesia is part of Oceania. The easiest way to reach destinations within Oceania is by commercial airline. Airports in Sydney, Brisbane, Auckland, and Los Angeles normally have direct flights to most locations. Fly from California via Hawaii to Sydney, Auckland, Tahiti, Fiji, Philippines, Palau and the Cook Islands.

Here are some flight options:

Ship
There are some options for boats, cruise ships, private yachts, adventure cruises, and even cargo ships.

The Polynesian people are considered to be by linguistic, archaeological and human genetic ancestry a subset of the sea-migrating Austronesian people and tracing Polynesian languages places their prehistoric origins in the Malay Archipelago, and ultimately, in Taiwan. Between about 3000 and 1000 BC speakers of Austronesian languages began spreading from Taiwan into Island South-East Asia, as tribes whose natives were thought to have arrived through South China about 8,000 years ago to the edges of western Micronesia and on into Melanesia, although they are different from the Han Chinese who now form the majority of people in China and Taiwan.

There are three theories regarding the spread of humans across the Pacific to Polynesia. These are outlined well by Kayser et al. (2000) and are as follows:

Express Train model: A recent (c. 3000–1000 BC) expansion out of Taiwan, via the Philippines and eastern Indonesia and from the north-west (“Bird’s Head”) of New Guinea, on to Island Melanesia by roughly 1400 BC, reaching western Polynesian islands right about 900 BC. This theory is supported by the majority of current human genetic data, linguistic data, and archaeological data.

Entangled Bank model: Emphasizes the long history of Austronesian speakers’ cultural and genetic interactions with indigenous Island South-East Asians and Melanesians along the way to becoming the first Polynesians.

Slow Boat model: Similar to the express-train model but with a longer hiatus in Melanesia along with admixture, both genetically, culturally and linguistically with the local population. This is supported by the Y-chromosome data of Kayser et al. (2000), which shows that all three haplotypes of Polynesian Y chromosomes can be traced back to Melanesia. 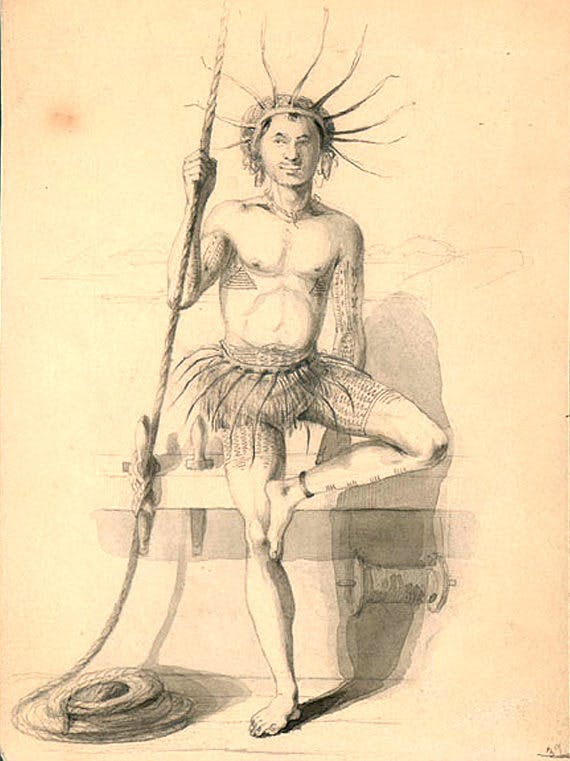