Micronesia is a huge sub section of Oceania.

The Micronesia region encompasses five sovereign, independent nations to include The Federated States of Micronesia, Palau, Kiribati, the Marshall Islands and Nauru—as well as three U.S. territories to include the Northern Mariana Islands, Guam and Wake Island.

The Federated States of Micronesia is an independent sovereign island nation and a United States associated state consisting of four states — from west to east, Yap, Chuuk, Pohnpei, and Kosrae — that are spread across the Western Pacific Ocean. Together, the states comprise around 607 islands.

The ancestors of the Micronesians settled over 4,000 years ago. A decentralized chieftain-based system eventually evolved into a more centralized economic and religious culture centered on Yap.

Nan Madol, consisting of a series of small artificial islands linked by a network of canals, is often called the Venice of the Pacific. It is located on the eastern periphery of the island of Pohnpei and used to be the ceremonial and political seat of the Saudeleur dynasty that united Pohnpei’s estimated 25,000 people from about A.D. 500 until 1500, when the centralized system collapsed.

European explorers — first the Portuguese in search of the Spice Islands (Indonesia) and then the Spanish — reached the Carolines in the 16th century. The Spanish incorporated the archipelago to the Spanish East Indies and in the 19th century established a number of outposts and missions. In 1887, they founded the town of Santiago de la Ascension in what today is Kolonia on the island of Pohnpei.

Something very important happened at Chuuk, then called Truk, during World War Two. On February 17th and 18 in 1944, the US Navy caught and sunk a large portion of the Imperial Japanese Naval Fleet within the Lagoon at Truk. The sunken fleet is now provides the best wreck diving in the world. To learn more, order the waterproof Franko Map of Truk Lagoon. 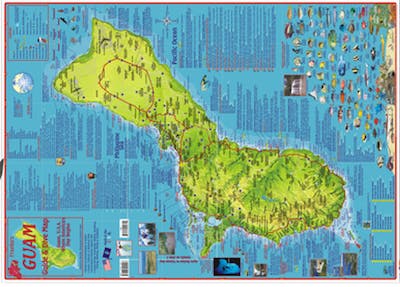 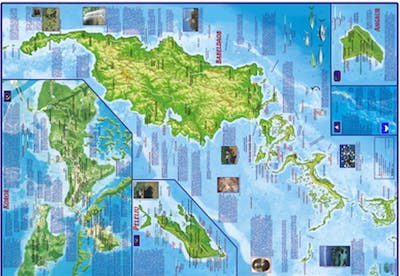 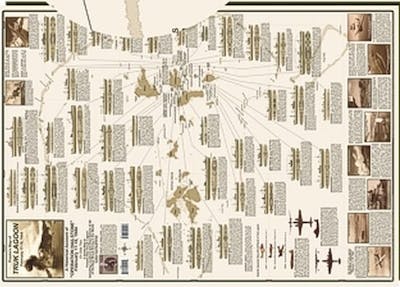